This post was transferred from its original home on another blog. The formatting is a mess, but maybe it can still entertain someone.

During the project demo, my Senseo ruined three Arduinos, one of which over a CAN-bus connection, and a USB port. I'm moderately proud of the remotely triggered explosion, but I can't stress enough how careful you need to be.

A few weeks ago I got the idea to mod my old Senseo pod coffee machine in order to control it remotely for a college project. It's finished and done, and I'm here to tell you how. For this post, I'll limit myself mostly to the electronics - the programming is a story of its own, although it didn't take me nearly as long.

Before I could tinker with the insides of my coffee machine I knew I'd have to take it apart. "No worries," I said to my self, "I'm pretty good at taking things apart!" I had no idea what I was getting into. I'll spare you the gruesome details and summarize: While serviceable, it's a pretty tough machine - halfway in I realized I didn't have quite the right maintenance manual and couldn't get one from Philips, and I ended up breaking every single clip that keeps the bottom in place. I got in, and that's when it got interesting.

I wrote this post as a story as well as an informal manual of how to approach this sort of project. As a result it may not do a very good job at either, but I hope it's interesting or useful to some. Feedback on my style, my methods or any bad advice I may be giving is very welcome.

Obligatory warnings and disclaimers: This will void your warranty. I will not be held responsible for any damage to devices, or for harm to yourself or others. Be respectful of electricity and it may not kill you.

The first order of business was figuring out where everthing is on the PCB. Even if my maintenance manual had been the right one it didn't come with any schematics, so I had the opportunity to poke and probe my way through a live circuit. Most of it is logic level, but a good few - unlabeled - areas were at 230 V.

Seriously, don't mess around with this. Even before I got shocked I made sure to have an off switch near my foot and afterwards I used rubber gloves much of the time. When you bump your hand into a live mains wire you'll probably jerk away, but even then it's not fun.

Identifying the various functions wasn't terribly hard. I'd already realized that I wouldn't be interacting with the microcontroller directly - soldering is not my forte - so it was limited to pulling one side of each button low and reading sensor data.

Now to figure out what the sensor data is and where to get it. How? With science, that's how:

When all this was done I knew that pin 1 of the plug is always high, and pin 2 rises from 0 V to 0.8 V when the sensor is triggered.

Then came the part that worried me most: I had to connect wires to everything I wanted to interact with. I'm honestly no good at soldering, but for the most part there was no alternative. Fortunately, these PCBs need to be tested after production which means that often enough you'll find test pads. Test pads are little blobs of solder that don't connect anything but do expose PCB traces. They're often slightly larger than other connections. More importantly: if you screw up while soldering a wire to a test pad, the odds of breaking anything are much lower. They're all helpfully labeled "TP##" here, too.

Sometimes there's an alternative to soldering: splicing. It's not necessarily better or worse, but on a crowded circuit board it can definitely be easier. I used this to connect the wires for the water level and temperature sensors, as those are connected to the PCB with a lot of slack in the wire.

There's a fairly decent wikiHow on splicing. To patch into an existing wire for measurement, follow the same steps but add your third wire at step 7. Don't forget to check which direction your third wire's going; during reassembly you'll want as few twists as possible. There are Proper and less proper ways to do this - I was lazy, skipped the solder and used electrical tape for the insulation. For serious durability you'll really want the safety of solder and the tidy look of heat shrink tubing.

After every new connection it's a good idea to test not only the new connection but also everything else that might have been affected. For each subsystem I ended up with an informal test procedure that usually only took a few seconds with my multimeter. One of my personal requirements was that the machine should still be able to work on its own after I was finished, so I included a few tests for that - as far as possible on a disassembled coffee machine, at least. 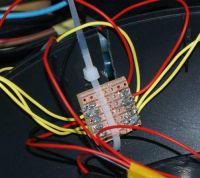 When everything was wired up I had to create a way to connect my Arduino to everything. It had to be tough, simple to use and preferably safe in the event of spilled coffee. I ended up with a pair of female header rows poking through the outer shell.

This is not entirely ideal. The main problem is that it's a hassle to connect nine jumper wires from a breadboard or Arduino every time I want to use it, as I found out later on. What's more, this is horrible for a more permanent setup as it's bulky and the wiring really gets in the way. If I ever do something like this again, I'll look for a suitable connector with a ribbon cable.

With that finished I had to put everything back together. I didn't really want to: there were a few things I couldn't (reliably) test with the machine opened up. After some more tests and doublechecks I finally did reassemble the machine, and to my surprise everything still worked like a charm!

Getting my Arduino to interact with this safely took a little extra work, and then I still had to write the code to expose convenient functionality like "Make me two cups of coffee". That's (maybe) for another post.

Some details that are a Good Idea to consider during any such project:

I really enjoyed this project. It was a first for me, and not only did nothing catch fire, everything still works! If you're interested in details or particular challenges I may have encountered, feel free to ask.